A newish promotional image for the upcoming Aliens Colonial Marine videogame has been released. The image was first seen in the cover of PC Gamer back in July but now you can see it here in full. It shows Winter, the main character in the game, being attacked by various aliens in a hive. The APC also makes an appearance in the background. 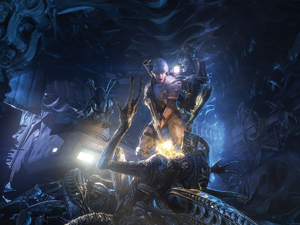 In related news, gameplay of the game will be shown in the next episode of GTTV. Make sure to check back on Thursday, September 29th, to see the new footage.