Back in June an AvPGalaxy forum member discovered a new book coming out: Alien Vault: The Definitive Story of the Making of the Film. 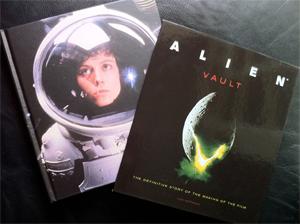 “Alien Vault reveals the details behind the making of the groundbreaking 1979 science-fiction horror film, one of the cult classics of the genre. This licensed, behind-the-scenes guide examines the creation of the movie via director Ridley Scott’s hand-drawn storyboards, concept sketches, script pages, spaceship blueprints, never-before-seen production photos, and rare collectible memorabilia.“

It’s being written by Ian Nathan, a well known journalist for Empire. It is scheduled for publication on the 2nd of September. However, Ian Nathan was at the London Film & Comic Con early July with some early copies of the book and Andrew Clark was lucky enough to get a copy. Check out some of the pictures he took of the book.