A number of body-less doll heads have found their way into the mail in-tray of several video game websites. What’s weird is that these heads are inscribed with the name Rebecca. Remind you of anyone? 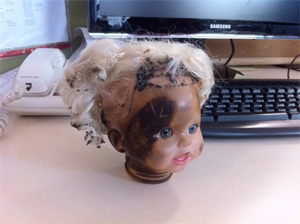 And the return address is to a certain Ms Rebecca Jorden, Newt’s full name. Could this be some sort of viral marketing for Aliens, perhaps for Colonial Marines? Kotaku even state they have “plans to see it at E3 in two weeks“. Now it’s not confirmed but we have also heard whispers of a playable demo of CM at E3. X-Box World seems to think so too:

“We know it’s not an unannounced title which we’ll be going hands-on with, and our highly-honed detective skills (thanks, LA Noire) suggests that it simply has to be Colonial Marines.”

Thanks to Ikarop for the news.