The Predators iPhone game released by Chillingo and Angry Mob has recently received a rather beefy update: 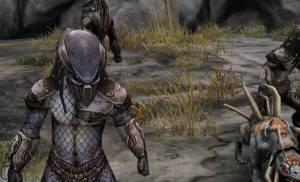 The update includes new Predator enemies, new weapons and new kill moves. The game received mainly positive reviews for its original release. Be sure to check out the trailer for the update. Thanks to HeavenlyBIGFOOT, Requiem28 and others for the news. You should also check out a recent interview Mr. Weyland did with the developers and publishers of the game.