Here’s an article I wrote comparing the picture quality between the original Predator Blu-Ray and the upcoming version. 20th Century Fox has given the new release a digital restoration and they weren’t kidding. Predator looks stunning. The grain that plagued previous releases has been removed completely. 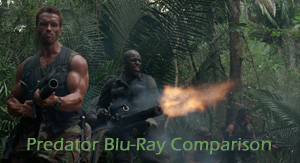 Predator: Ultimate Hunter Edition goes on sale June 29th in the US and July 5th in the UK.