It’s officially February 16, 2010 in the US which means for those of you there, you will be able to get your hands on Aliens vs. Predator today. AvP is available on Playstation 3, X-Box 360 and PC. Remember, you have the Standard Edition and the Hunter Edition (for PS3 & X360 only). The latter comes with downloadable multiplayer maps, as well as a posable facehugger model, a Weyland Yutani sleeve badge, a 3D lenticular postcard and a graphic novel. 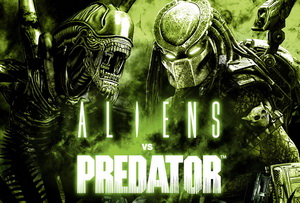 Loved it? Hated it? You can post what you thought of the game in the Fan Reviews thread. I’d also check out our Aliens vs Predator Forum because I expect it’s going to be pretty busy there this week. For those of you who get the PC version, we have a Steam Group which you can join. I also wrote a couple of articles covering the Alien Abilities, Predator Weapons & Equipment and Marine Weapons & Equipment. If you get stuck in any of the campaign missions, someone on YouTube has uploaded a full video walkthrough of all the missions. AvP will be released in Australia on Thursday and in the UK on Friday.