MCV have confirmed details of the European editions of Aliens vs. Predator. The game will launch in Europe on Friday, February 19th and there will be three editions. Standard, Survivor and Hunter. The Survivor Edition comes in a steel case and features a code for downloadable multiplayer maps, which will be available post-launch. The Hunter Edition will also contain the maps, as well as a posable facehugger model, a Weyland Yutani sleeve badge and a 3D lenticular postcard. No details on prices as of yet. 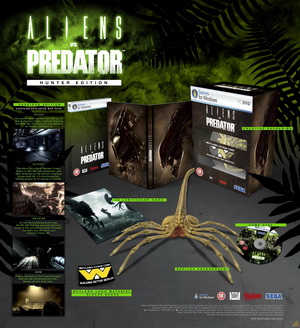 Thanks to newbeing and Ikarop for the news.

Update #1: Pictures of the Survivor and Hunter packs have appeared online. Read More to see them. *Pictures removed at request of Sega as updated images has been released.

Update #2: Here’s a super high-res promo picture of the Hunter Edition which shows pictures and a description of the four exclusive maps as well as the other items listed above.