The final box art for the upcoming Aliens vs. Predator game has been revealed. Check it out below or visit this thread for high-res shots of the artwork on PC, X360 and PS3. This is the UK artwork judging by the rating but the US artwork will probably be similar. 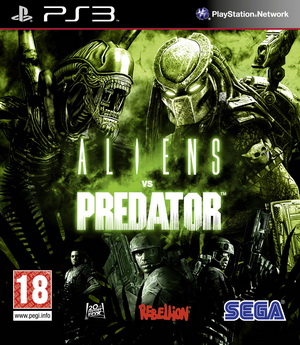 In related news, the game will not be released in Australia. “Apparently, the game’s excessive gore and violence exceeds the requirements for a MA15+ rating. Without an option for an R18+ rating, Aliens vs. Predator becomes the latest title to join the ever-growing list of essentially “banned” games in the territory.” Rebellion have responded by saying they won’t be releasing a censored version of the game either. Thanks to ikarop for the news.