There’s five new screenshots from Aliens vs. Predator on 1UP.com. Most contain all three species battling it out. 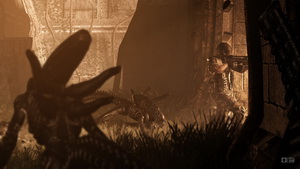 In related news, Rebellion recently made an announcement that they will be supporting DirectX 11 which comes with the newly-released Windows 7. AvP will be one of the first titles on the market to support this. There’s also new video interview with Darius Sadeghian who talks about the alien gameplay. Thanks to affinity, Private W Hudson and Redskins for the news.