You may remember we had the AvP Marine trailer in July 2009, I guess this new video from the Sony Preview Event 2009 in Toronto marks the first time we see a direct feed of some marine gameplay which shows off the HUD. 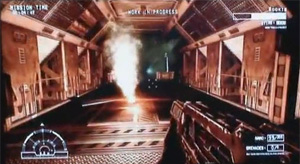 Fast forward the video to 2:06 and you’ll see 30 seconds of marine gameplay. There’s also another video here which shows marine gameplay for a split second at 0:19. Thanks to Ikarop for the news.

Update: Another new video has been uploaded showing a minute and half of marine gameplay from the same level.