Pictures from the San Diego Comic Con have started filtering onto the internet and of particular note to us Aliens and Predator fans is this one: 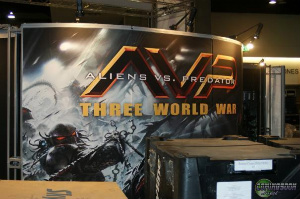 It is from the Dark Horse section of the con and is the first we’ve seen to do with the Aliens vs Predator series that was announced by Dark Horse. No other details about the series are known other than that John Arcudi is writing it. Thanks to X-SOLDIER for the news.

As well as this, Aliens #2 is in stores today. Dark Horse posted a preview earlier this week. Also look out for our review of Predator #1 soon and an interview with the editor of the comics, Chris Warner.

EDIT: Comic Book Resources have just posted up an article about the new series, complete with art and details. Thanks to VikingSpawn for the tip.