There’s a new E3 video interview with Tim Jones from Rebellion on GameTrailers. He talks about the various creatures and what to expect. He also confirms that there are three separate singleplayer campaigns and you can play either from the outset like in previous games. 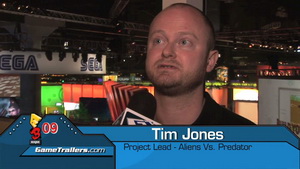 There’s also a new preview over on Gamespot who talk about the Predator footage we saw yesterday as well as some Marine footage they saw. Thanks to Chet and Doomsday for the news.