Well we’ve all seen the screenshots in the magazines and the scans we’ve uploaded but now AvPGalaxy is proud to present you guys with the first high-res screenshot from Rebellion’s upcoming AvP3: 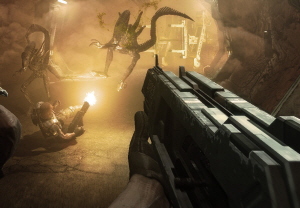 I know this isn’t a new screenshot but it is the first to be officially released by Sega on internet. It is also being labeled as the “Marine POV screenshot” by Sega. You can the original article over at Sega.com if you want. Keep nosing about as even more screenshots and a trailer are apparently being released sometime in the next 2 hours.

EDIT: Sega has released two more high-res shots. Unfortunately none of them are new. However some minor story details have also been released which confirm my speculation that the ruins where actually a training pyramid like the one seen in the first movie.

There is also supposed to be a trailer but I can’t find the link. I’m just waiting back on Sega to find out what’s going down regarding the trailer.