Comics Continuum has just posted up the story details and cover art for the second issue of Dark Horse’s new Aliens series: 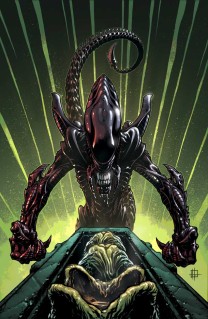 “Jealously guarded by a half-mad group of planetary prospectors, the labyrinthine necropolis may be a treasure trove of incomparable wealth, or a funeral complex with no exit, as an archaeological team from Earth discovers too late.”

Issue 2 is due out on the 22nd of July. The series illustrator Zach Howard is also registered on our forums so feel free to post him questions in the Aliens comic discussion board. Thanks to VikingSpawn for the heads up.

EDIT: A 4 page preview for the upcoming Flip Book has been released on the Free Comic Book Day website. The pages appear to be from the Predator story and make me wonder if the preview will be coloured or not.

EDIT: Dark Horse has just released a full colour preview for the flipbook. It contains several pages from the Alien story and several from the Predator. And it looks pretty sweet. Thanks to Viking.