So we’ve had Colonial Marines in the headlines lately but a few small mobile phone games have snuck their way onto your mobiles: 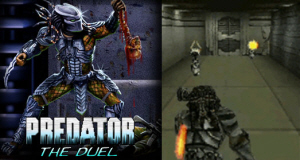 “Play as the Predator and create havoc in the high security prison camp of Terminal City. Avenge the slain forefather by vanquishing Major Duke. Destroy, bypass or manipulate the high security systems with ingenuity or sheer brute force. Then play as Major Duke, who must beat the odds by taking on marine soldiers and in a final showdown must take down his otherworldly nemesis, who has traveled light years only for this trophy. Decide who wins in this legendary battle; the man or the brute.”

You can either have a 2D or a 3D version depending on your phones. The games have been developed by IgFun who also have a BioShock mobile game under their belt. Check out their website for more screenshots and info. Thanks to HybridNewborn for the news.