You may have seen the picture below circulating around the net the past week. These posters were taken at the San Diego Comic Convention last week which led many people to believe there was a new game or movie coming out in 2009. In fact, these posters are from Dark Horse. 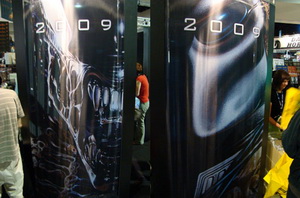 They will be re-launching all three comic franchises in 2009, starting with a new Aliens series in May 2009, a Predator series following in June 2009 and finally an AvP series in November 2009. Check out the full press release on Dark Horse.com. Thanks to StealthHunter and Xeno for the news.