There’s a new video interview with Tom Woodruff over on IGN. Like the previous interview, he talks about working on AvP Requiem amongst other things. 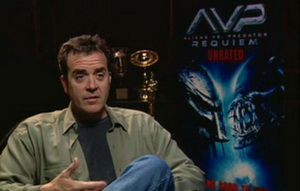 IGN also have another video. It’s kind of a trailer for the Unrated DVD and the video contains a lot of the unrated scenes. Thanks to XenoVC and ElitePredator for the news.

Update: DreadCentral also did a video interview with Tom Woodruff. It’s much longer than IGN’s – over 12 minutes long. Couple of interesting things I noted. He mentions that Alec and himself had aspirations to direct AvP Requiem themselves. Tom also pitched an idea to Fox for Alien 5 but revealed Fox had no interest in going back to the Alien series.