There’s a couple of new reviews on Blu-Ray.com. The first for AvP Requiem. It’s pretty detailed and they give it 3.5/5 overall. The next one is for Predator. They gave the same score to that one… but only because of the absence of extras. The movie itself scored 5/5. 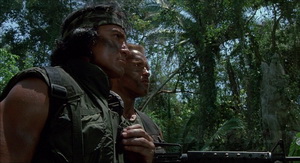 The reviewer mentions you can make out new details in the movie because of the high-definition. Like gruesome details of the skinned bodies hanging in the tree. It’s such a shame Fox didn’t include the features from the SE DVD though. It’s the best film in the series.