There will be a new DVD Set released in Japan which includes a Predalien figure and a two-disc Extended DVD Set of AvP Requiem. It’s limited to 3000 sets. Check out this thread for more details. 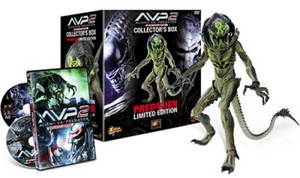 There will also be a huge Alien/Predator boxset released in Australia which includes 16 disks – two for every film in the series. Entitled Alien / Predator – Total Destruction: The Ultimate DVD Collection, you can find it on ezydvd.com.au. It costs AU$119.83 and will be released April 23, 2008. Thanks to Facebox and beeko for the news.