This is some big news. The magazine Game Informer will have a first look at the new Aliens: Colonial Marines game by Gearbox in March’s issue. The name should sound familiar. A similar game with the same name was being made by EA / Fox Interactive back in 2001 for PS2 but was ultimately cancelled. Check out Game Informer’s cover where the new Aliens game is featured: 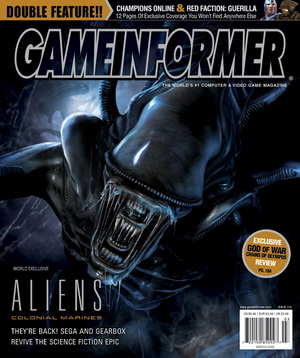 Not sure what day the magazine comes out but someone will surely scan it in. It will have the first pictures of the game in action. Aliens: Colonial Marines will be released for consoles and PC in 2009. Thanks to sturmgewehr, Cellien and AvP2Daily.de for the news.