I gave some people a little preview of this article earlier this month but I’ve decided to publish it now. I added a few new scenes since then. The article covers the Deleted Scenes in AvP Requiem. Over 30 minutes were cut from AvP Requiem due to Fox not giving them any more money for effects etc. Most of the material, we’ll never get to see. 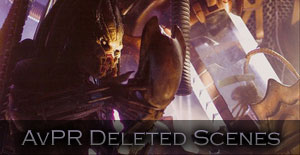 This article covers scenes we’ve seen in past trailers, production stills etc that weren’t in the theatrical version and also what to expect from the upcoming DVD. It’s fairly interesting. Not a lot of people know about these scenes. I’ll probably do another Deleted Scenes article after the DVD has been released.