Some of you may remember the two AvP mobile games produced by Superscape. Well they’ve created another one, this time for AvP Requiem. I’ve just received a little press packet with information on the game and a number of new screenshots: 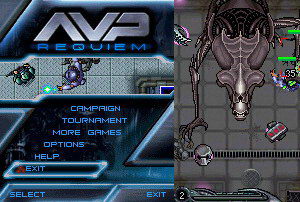 Unlike the last game which was a 3D on-rails-shooter, AvPR is a 2D bird’s eye view shooter, somewhat similar to Aliens: Thanatos Encounter. Storywise it seems to have nothing to do with AvPR other than being set on earth. Superscape has a profile page online with a couple more pictures. Read more for more information and pictures.