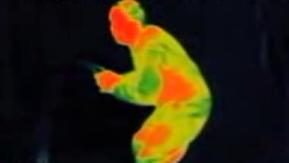 It takes place at a cemetery, Molly and Kelly are called over by a random man hiding, played by Tom McBeath, an actor in another Vancouver based series Stargate. Wolf is patching himself up with his medkit and proceeds to hear the trio hiding. Want to know more? Then click here. Beware spoilers. I’m assuming that’ll this’ll be removed by Fox soon enough if it is actually a leaked clip.EDIT: As expected, the clip has been taken down.