I was just browsing Giga.de and found this featurette that’s over 20 minutes long. It’s a general thing about Alien and Predator but there’s quite a few behind-the-scenes stuff in it from AvPR. You can’t tell what the people being interviewed are saying because of the german voiceover but the english version will probably released later. 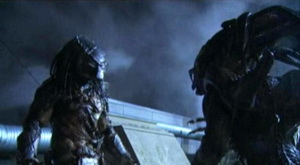 You can download the video here. (107MB) As I said, there’s some new shots. The Wolf vs Hybrid fight, some more stuff of the alien swimming underwater. Also more shots of the human characters running around. There’s also a new sequence with Wolf inside a Predator ship maybe. You can make out the hanging green dummys (CGI would have been used in post) in the background. I’ve also added 30 captures to the Gallery.