There’s a new article about AvPR in this month’s Empire Magazine. Empire spoke with the directors and some of the cast from the movie. There’s also a couple of new pictures: One of Kelly aiming a gun out of a helicopter and the other of her daughter Molly running in the rain. 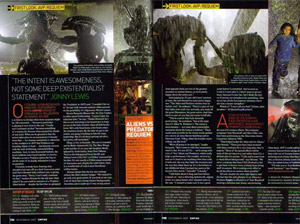 Thanks to War Wager, you can find a transcript of this article in the forum and the scans here. There’s a couple of interesting points. Empire have the budget of AvPR listed as $40m (estimated). Think on, AvP’s budget was $45m. They’ve also got an interesting timeline and have the events in AvPR listed in 2007. Hence, the film takes place in 2007, and not in 2004 like in AvP. This could be a mistake though.

Edit: Nevermind, AvPR does take place in 2004 straight after AvP.