Seems the Strause Brothers will be presenting AvP Requiem at the Los Angeles Comic Book and Sci-Fi Convention on Sunday, November 4th in Shrine Hall at 1PM. They will show film clips, discuss the making of the film, and take any questions. Fox may have give-aways from AVPR, and the directors may sign autographs after the presentation. That’s not all, there’s also four new pictures on the Convention Website. 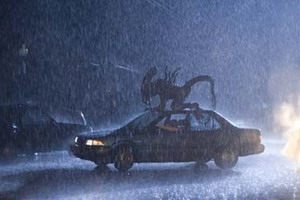 They’re not the best pictures in the world though. They’re behind-the-scenes pictures. The first shows an alien leaning over the guy who gets acid over him. Second one (shown above) shows an alien on a car, next one is a shot of the Predalien attacking somebody in the hospital and finally a shot of Colin/Greg. Thanks to JediMasterConor and Izzet for the news.