NECA has finally gotten around to adding AvP Requiem to their ever expanding list of franchise licenses. Not only that but we’ve also got a new picture: 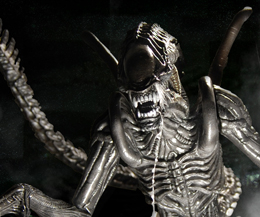 At the moment, there isn’t much on AvPR’s page, only a little page on the Alien Warrior figure. Expect more pictures in the upcoming month. Thanks to Tangent for spotting the picture.

Update 20/10/07: NECA have released a lot more pictures on their site.