The next issue of Fangoria – which was due out October 23rd but was released early in some places – featured a few new pictures: 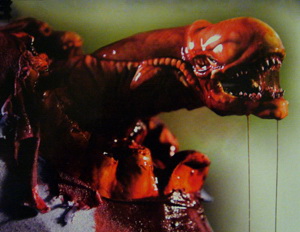 The other two pictures are of Buddy Benson, played by a Vancouver actor, Kurt Max Runte being face hugged. And the last is of a face with prosthetic made up like it’s being melted by acid. I’m not sure if it’s the same actor/character from the red band trailer.

As well as the pictures, the issue featured an interview/article but apparently didn’t say much new. You can view the rest of the pictures in our forum. Thanks to Uncanny Antman for scanning these images.