If you’ve been following our forums, for a good part of today a number of our members have been raving over the recent issue of Toyfare, a magazine dedicated to figures and etc. This was for a good reason: 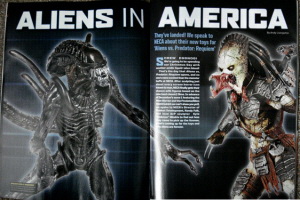 For the most part, it’s an interview which talks about the detail in the sculpts and on the license. However, it did also mention something about the new figures coming out. Wave 1 will contain the Alien warrior and the Predalien plus a variant Predalien.

Wave 2 will be out next next year and will be 3 variants on Wolf. Turns out NECA also have the license to do Alien figures, a photo of the prototype sculpt can be seen in the article. Thanks to Demonio Cazador, I’ve uploaded some scans of the article onto the forum for all.

Update: Scans can be found on the next page.