The Official AvP Requiem Website has been updated. I’m having some problems though. Sometimes, the new site will load, and other times it won’t. 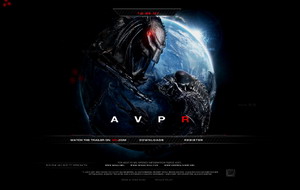 There’s a Downloads link which funnily enough doesn’t work for me either. Apparently, there’s some wallpapers on there. The website also has the release date listed as the 26th now, a day after its previous release date. Thanks to Yellow Alien for the news.

Update: The three wallpapers can be found in this post on the forum.