I have to admit, overall, I thought the trailer was great. Lots of cool things in it. I loved the blue thermal vision. If anything, the movie will have more action than AvP and especially gore. Some CGI effects were a bit iffy for me. Anyway, many of you may remember I did a Teaser Analysis for the first AvP back in 2004. True to form, here’s my analysis for the AvP2 trailer scene by scene. Check it out below. Some things may be wrong, some things may be right. It’s just my take on it.

First we see a small Predator ship heading towards Earth. Very reminiscent of the ship in Predator 2. It could very well be an escape ship from the ship in AvP. But as to how Facehuggers are on board as well as the Predalien is anybody’s guess.

Next up, we see a search party in the forest… most likely looking for the missing father and son. At some point, the Predator is cloaked in the forest and kills a police officer running.

Just worth noting that I love the blue thermal vision. Looks great.

Okay, here we see two Facehuggers escaping from stasis tubes that were on the downed Predator ship. Not exactly sure why Facehuggers held in stasis would be on an escape ship in the first place. (If that’s what the crashed ship is). Plus we know, that it’s not the ship in AvP that crashes onto Earth.

A few shots of cast members. Kelly O’Brien (Reiko) with her daughter Molly (Ariel Gade). Another shot of Dallas (Steven Pasquale) and his younger brother Ricky (Johnny Lewis). They look as if they’re exploring the sewer. Then there’s a shot of two people running through the forest.

Another scene featuring Sheriff Morales (John Ortiz) and another officer discovering a skinned body hanging from a tree.

A shot of three of the actors. Think it’s Jesse (Kristen Hager) on the left, then Dale (David Paetkau) and Ricky (Johnny Lewis) in the front. Ricky tells his brother Dallas and Sheriff Morales that something attacked them.

Quick shot of an Alien. Not sure where it could be with the green light.

Shot of Kelly and her daughter Molly in a vehicle.

Lovely shot of the lead Predator with its dual shoulder cannon.

Cuts to inside a shop. An alien attacks Dale (David Paetkau), I think. The Predator is in the same room and spots the Alien. The Green Alien vision from AvP makes its return. A few seconds later, it cuts back to the shop and the Predator kills the alien causing the acid to burn Dale’s face off.

Another shot with the Predator using its shoulder cannon as a gun.

There’s a scene mentioned in the Trailer Description post here. Molly has a nightmare or something, her father, Tim O’Brien (Sam Trammell), and her mother Kelly are in her bedroom. Tim shines a torch towards the window and an Alien jumps through. Kelly and Molly escape.

Looking up towards a firefight. Hive resin can be seen at the top so I’m guessing this is in the hospital.

Shot of the Predator holding a spear.

Very confusing shot below. The Predator is on the left. On the right, it’s the Predalien. But on the second shot it turns and it looks like a young Queen. I hope it isn’t but it’s been suggested that it’s a Predalien Queen. A queen wouldn’t have the pipes on its back or only two arms. Looks a lot like a Praetorian from the games too.

Predator is at the hospital (notice the hive resin and the signs) and throws its shuriken weapon at a girl and impales her to the wall. I think it’s Jesse (Kristen Hager). In the background we can see Ricky, Kelly and Molly. There’s also another guy right at the back. Can’t really make him out.

The Predator is outside the Power Plant, I assume. Also has a new weapon, a whip that he uses to catch an Alien and then splits it in half.

Shot of somebody in a clothes store with a cloaked Predator beside him who grabs him.

Notice on the monitor, it says “Projected O.W.L.F Containment Levels”. Does OWLF sound familiar? It stands for Other World Life Forms and it’s a nod to Keyes’ team in Predator 2. OWLF was on one of the monitors (see second screenshot) in the scene where Keyes is explaining to Harrigan what’s happening outside the meat-locker. 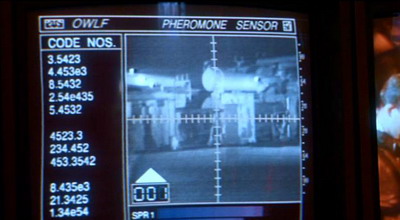 Scene in the sewer, maybe. The Predator grabs two aliens at the same time. Notice the strange red lasers in the background. Looks like the Predator set up a trap. I know a lot of Alien fans are pissed at this scene but maybe the aliens break free.

Scene involving a fighter jet flying and then a shot of it dropping a missile/bomb out of the hatch. I guess the military think the best way to deal with the aliens is to destroy the whole town.

This scene is familiar. From the recent production still. An unmasked Predator impales the Predalien with its wristblades. Most likely takes place towards the end of the film. There’s another shot a little later showing the Predator getting impaled with an alien’s tail.

Here’s Kelly O’Brien firing a machine gun at something.

The Predalien can be seen below attacking a waitress (Carrie Adams – Gina Holden) in a back-kitchen.

An Alien crawling down (or falling down) an elevator shaft.

A construction worker is killed by an Alien.

Someone is dragged through a window by an alien and killed. Somebody else is trying to help him.

This one shows the Predator running from the crashed Predator ship. Looks as if it’s about to explode. The Predator has probably set it to explode to get rid of the evidence.

Here’s the Predator in the Sporting Goods store showing off the dual shoulder cannons. On the left is Scotty (Juan Riedinger) and on the right is Earl (Rainbow Francks). Both are killed by plasma blasts to their heads.

Another scene involving the Predator falling, most likely in the Power Plant.

Some guy below getting a head-bite through the face. Think it’s in the hospital and it’s by the Predalien.

Ricky (Johnny Lewis) gets impaled by an Alien’s tail in the hospital (?). Also notice that he drops a Predator shoulder cannon.

Final scene of the trailer with somebody firing a Predator shoulder cannon at an Alien.