Seems that Civilized Beasts isn’t the only Alien vs Predator comic making its way to us in the upcoming months. I’m not sure where this has come from, but news of a new comic called Sand Trap has made it’s way to a site called Vision Thread: 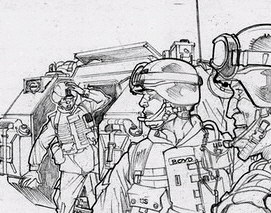 “A weary band of brothers serving time in a dust-ridden desert war, sometime around now… Its not a popular war, but lots of people want a piece of it, and they’re willing to kill however many civvies it takes to send a message. But this squad’s just pulling duty for Uncle Sam and a scholarship. They just wants to make it home in time for cornflakes, that’s all. And when they stumble over a monstrous fight they have no business interfering with, the cornflakes aren’t that important anymore…”

The comic is set to be released to coincide with AvP2’s release and will be 22 pages, illustrated by Davide Fabbri. From the looks of the preview, it looks to be set in modern times somewhere in a desert country, most likely Iraq. Thanks to Harry72 for the heads up.