Looks like Fox is releasing yet another Alien/Predator boxset, this time called the Ultimate Collectors Edition: 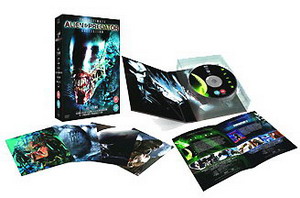 There is no information on what’s in the set, but from the picture, it looks like a repackaging of the old Alien Legacy and Predator single disk DVDs. Hopefully we’ll be finding out more soon. The set looks to be a UK exclusive and is to be released…in a weeks time, on the 28th. How’s that for timing? You can pre-order the set at Play.com, HMV and Amazon. Thanks to John Chambers for the tip.