Look what we have here. You may remember ADI brought out a book around the time AvP was released called “The Creature Effects of ADI”. Well, they’re bringing another one out for AvP2. There’s two pictures on the right panel that are from AvP2, right? Okay, the Predator picture is too small to see anything but at least it’s something. :wink: 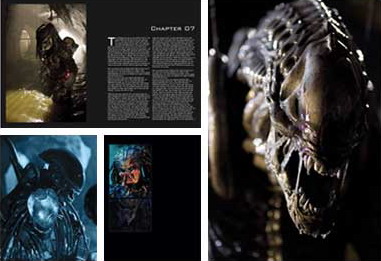 “Alien vs. Predator: Survival of the Fittest is the upcoming sequel to 2004’s Alien vs. Predator film. In this follow-up to the worldwide hit ALIEN VS. PREDATOR, the iconic monsters from two of the scariest film franchises ever, wage war in an American Midwestern town ”” with the residents caught in the middle.”

Notice that they’re also using the “Survival of the Fittest” tagline on the book. Special thanks to Harry72 from AliensVsPredator.de for finding this.