Looks like ReelzChannel have done a new segment on AvP2: “The Special Effects of AvP2”. They went to the ADI Studio and talked with the guys behind the special effects, Tom Woodruff and Alec Gillis. This is more of a general featurette until the very end when they talk about AvP2. They say because of the story in AvP2, it’s a different Predator this time; they’ve tried to come up with a different version of it which is very detailed and very complete. 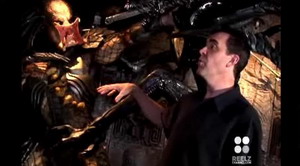 Thanks to Phil for the news.