Figures.com have recently posted up a nice mini-review of the McFarlane’s 3D Alien Poster:

“The Alien poster (above) is my favorite. Simple in design, the poster recreates the alien’s egg made famous in the first film. Set against a background of sheer black, the egg is cracked at the bottom and trimmed in a bright yellow and green to make it appear even more sinister. Above the egg, set in small, three-dimensional letters, is the word “ALIEN;” at the bottom, the film’s famous catch phrase: “In space no one can hear you scream.” Again, a simple poster design that’s both eye-catching and fascinating…. What makes the Alien poster stand out from the other two posters is the lighting effect (seen above). Once two AA batteries are installed, the egg actually emits light, which gives the poster an even more menacing appearance.” 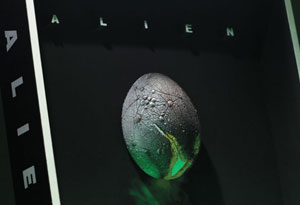 You can read the rest of the review here.
Thanks to PlanetAvP for the heads up.