Movie Infos has just posted up the first official AvP2 image. Check it out: 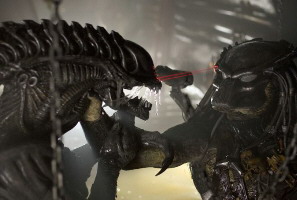 This picture is our first look at the new Aliens style aliens in AvP2 as well as the Predator, which goes back to the look of the original. It looks pretty damn good in my humble opinion. You can check out the full size image at Movies-infos.

UPDATE: Colin Strause has confirmed that this is an official photo. He also went onto explain the lighting etc: “On set photo’s are never taken from the correct lighting angle because they are working around our motion picture camera, so this will make the photos not look as good as the final movie. They are too front lit, too bright, and might be missing all of the slime on the creatures because the photos are usually taken in-between takes.”

UPDATE #2: Colin has recently been able to tell me that: “As for the laser, it is real and done in camera. We put a lot of atomosphere in every shot, and that makes the laser show up instead of doing it always in CGI.” Their attention to detail and enthusiasm is really making me excited for the film.

UPDATE #3: A much higher res shot has been found by AliensVsPredator.de. Image in our gallery has been updated too.