Eight new high-quality behind-the-scenes pictures from Alien vs Predator 2 have surfaced. These were taken by somebody called “Mussels” last October on the AvP2 set in Port Moody. You can find them in the AvP2 Gallery. Here’s one of them which shows the Coyote, an Armoured Vehicle with some other army vehicles in the background: 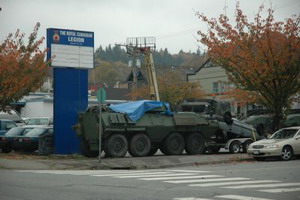 The images range from props to camera cranes. You can also see a door with “Alien” written on the front in one of the shots. You can find the rest in the AvP2 Gallery. Many thanks to Trioxide for sending them.