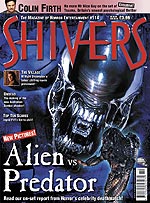 Well, this was the news we were all expecting the last few months. According to Dark Horizons, Alien vs Predator has officially gained a PG13 rating:

“An interesting set report from the team-up is at VisiMag. The film has officially garnered a PG-13 rating.”

If you also read the original article on VisiMag, it gives no indication to the rating but the complete article in the magazine apparently features this news. The set report can be found in Issue 114 of ‘Shivers’ and the magazine’s cover is on the next page if you want to buy it.

Thanks to Agent Glenn, Oh and Dark Horizons for the news.