I’ve just been informed of a new comic in production by Rival Comics called Alien Vs. Predator Dissolution. Here’s the storyline:

“When their ship malfunctions and is forced to land, Captain Lillian Bell and her crew find themselves on the surface of a strange jungle planet with few signs of life other than the plants and ancient, inhuman temples that stand on the planet’s surface. Their attempt to explore the temples goes horribly wrong, however, when they find themselves in the midst of a Xenomorph hive, and nothing can prepare them for the horrors that are yet to come when they discover that there is another species roaming this planet as well: the Predator. Four months later, a Marine ‘rescue’ crew arrives, completely unaware of the hell that they will unleash…”

All conceptual artwork has been completed and sequential artwork will begin in March. Here’s a couple of artwork images from their gallery:

If anybody wants to know more on this comic, check out their website or take a look at their Gallery for more conceptual artwork. 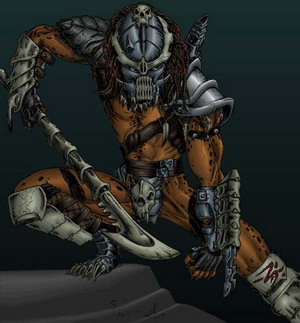